In Praise Of Learning

In Praise Of Learning

Learn the elementary things!
For those whose time has come
It is never too late!
Learn the ABC. It won’t be enough,
But learn it! Don’t be dismayed by it?
Begin! You must know everything.
You must lake over the leadership.

Don’t be afraid to ask, comrade!
Don’t be talked into anything.
Check for yourself!
What you do not know yourself
you don’t know.
Scrutinize the bill,
it is you who must pay it.
Put your finger on each item,
ask: how did this get there ?
You must take over the leadership.

Music Video of the Week

Stand By Me – Various Artists

Music Video of the Week |

Picture of the Day 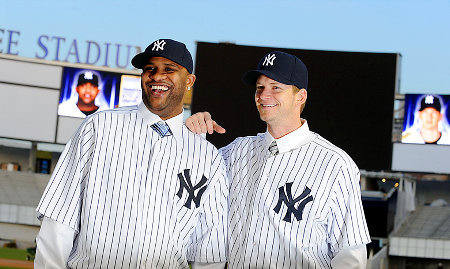 CC Sabathia and A.J. Burnett pose for pictures at the new Yankee Stadium.

Picture of the Day |

History in the Making 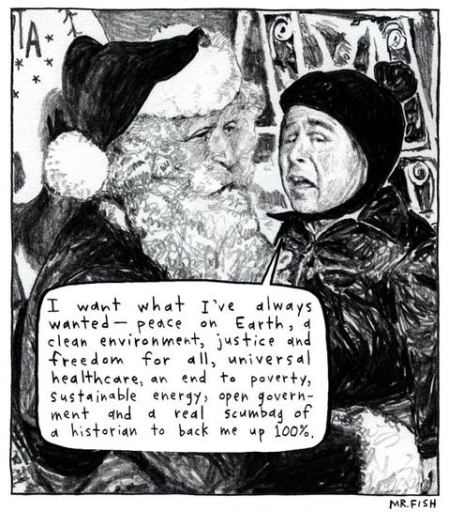 Voice of the Day

“Sometimes it seem like to tell the truth today is to run the risk of being killed. But if I fall, I’ll fall five feet four inches forward in the fight for freedom. I’m not backing off.”

Voice of the Day |

In solidarity with the Iraqi journalist

Cartoon of the Day

Cartoon of the Day |

My wife just called me to give me the news……and it is news!

It hardly ever snows in N.O. but it is today!

Here’s some pics of the city. Canal Street and the Superdome as its rarely seen. 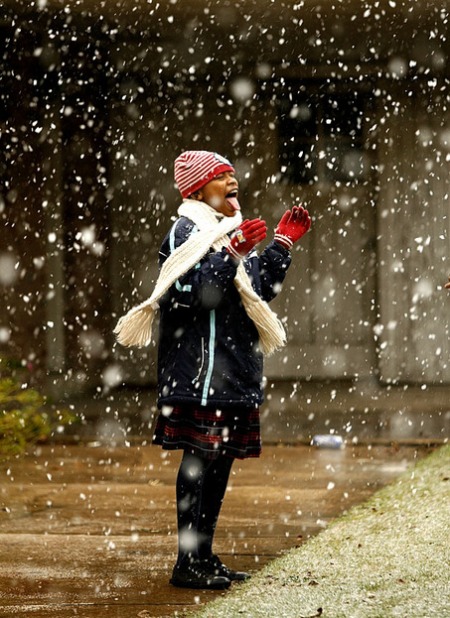 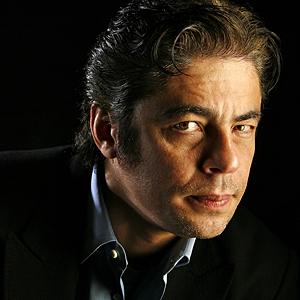 Benicio Del Toro has made a career of playing men on society’s outskirts. Now as the revolutionary ‘Che,’ he shows his power.
By Mark Olsen
December 11, 2008

In films as varied as “The Usual Suspects,” “Basquiat,” “Fear and Loathing In Las Vegas,” “Traffic” and “Things We Lost in The Fire,” Benicio Del Toro seems drawn to play the eccentric outsider.

Now in director Steven Soderbergh’s “Che” — which opens for a one-week run on Friday in Los Angeles and New York — Del Toro plays 1950s and ’60s revolutionary leader Ernesto “Che” Guevara. Following Guevara from Mexico to Cuba to New York to Bolivia, the film — which will screen as a single 4-hour unit during its short run, and be broken into two separate films for the wider release in January — has a broad sweep, but also an eye for the specific, becoming perhaps the ultimate expression of Del Toro’s physical, enigmatic screen presence.

The project began with the 41-year-old Del Toro, who took an interest in Guevara’s book “The Bolivian Diary” and pursued the idea with producer Laura Bickford. This was just before his turn in the 2000 film “Traffic” (Bickford produced and Soderbergh directed), which earned Del Toro an Academy Award for supporting actor.

Del Toro’s work in “Che” appears to be a rare and a truly fortuitous match of actor and role.

“It certainly seemed that way to me immediately,” said Soderbergh of the way in which Del Toro suited the part. “I had the same sensation I had when I was working with Julia Roberts on ‘Erin Brockovich,’ the right person in the right role at the right time.”

Despite the film’s controversial reception following its premiere at the Cannes Film Festival — Variety called it “defiantly nondramatic” and “a commercial impossibility” — Del Toro, who also has a producing credit on the film, was awarded the best actor prize. Sean Penn, who led the festival jury, later called Del Toro’s work “one of the first tour de force performances in film history that doesn’t rely on the close-up.”

Del Toro’s tall, broad frame is frequently shot by Soderbergh in a full-body shot, so that the actor works with his shoulders and hips as much as his eyes, while allowing other actors equal visual weight within the frame.

“When Che wrote he was very honest; that’s one of the first things that really moved me,” said Del Toro. “My first attraction toward Che was a book of letters he wrote to his family. There was an honesty in that, where he could be very self-critical, but also with a witty nod.

“The approach of the movie is to be true, factually true from what we gathered, but also true to him.”

Del Toro believes the film will have a life beyond whatever it may (or may not) make at the box office during its initial theatrical releases. It recently played to cheers in Havana and protests in Miami.

“One day, the movie will pop up and they’ll shake hands with it,” he says. “I remember the first time I heard [ Miles Davis’ landmark 1970 album] ‘Bitches Brew,’ I was like, ‘I can’t listen to that’. And then one time I was driving and one of the songs came on and everything changed. This movie, at some point it will change someone’s mind, what they thought it was.”

Before shooting the final sections of the film that portray Guevara’s time in Bolivia at the end of his life, Del Toro dropped some 35 pounds. For Guevara’s arrival in Bolivia in disguise, he shaved the top of his head rather than wear a bald cap. For his role in “Fear and Loathing In Las Vegas” as the fictional sidekick Dr. Gonzo (based on writer Hunter S. Thompson’s friend and attorney Oscar Zeta Acosta), Del Toro put on 40 pounds.

It seems only fitting that following the release of “Che” he will next be seen in a new version of ” The Wolf Man,” perhaps the ultimate story of personal transformation.

“I wish I could stay home,” he said of what draws him again and again to roles that require severe physical transformation and deep emotional commitment.

“I wish I could be asleep right now. But why do I do it? That’s the way the cookie crumbles for me, I’m that kind of actor. Do I invite it? Maybe. At the same time it invites me.

Penn was chosen as best actor for his performance in the lauded film about Milk, the openly gay San Francisco politician who was assassinated in 1978.

Josh Brolin won best supporting actor for his performance in the film. On Tuesday, Penn was chosen as best actor by the Los Angeles Film Critics Association.

“Milk” also leads the Broadcast Film Critics Association with eight nominations, tied for the most with “The Curious Case of Benjamin Button.”

Like their West Coast brethren, the New York critics picked Sally Hawkins for best actress for her performance in Mike Leigh’s “Happy-Go-Lucky.”

The New York circle, which last year chose “No Country for Old Men” as best film, is a group of 33 New York-based critics.

Their picks are one of the early film honors in Hollywood’s long awards season, which continues Thursday with nominations for the Golden Globes.

Jenny Lumet, daughter of Sidney Lumet, won for her screenplay of “Rachel Getting Married.”